We are getting the dry stretch we needed to make the final touches and mow out
the Lakes course for reopening next week!

Friday February 7th is the lucky day! (Weather permitting of course)
Call the Golf Shop to book your tee times (972) 466-9850
If the phone lines are as HOT as we think they’ll be, don’t forget you can search for times and BOOK ONLINE at www.indiancreekgolfclub.com/teetimes
Posted by Back9 Marketing at 9:54 AM No comments:

After a long 2019 season, we are excited to announce the reopening of the Lakes course this January.  All of us have been patiently waiting for Mother Nature and all the elements needed to come together for the course to reopen, now we are finally ready to cross the finish line.

Early next week we will have new GPS installed plus technology updates to help manage traffic for optimal turf care, once this step is complete the course will open for a preview of the NEW cart paths, greens, fairways and tees.  Timing is based on the completion of the GPS install so please stay updated by following us on one of our social media channels or DOWNLOAD THE APP to receive an instant notification when the tee sheet opens for tee time booking.  Tee times can also be booked online for a special ‘preview’ rate!

Speaking of new cart paths…we will remain Path Only until turf grass is matured and can handle daily traffic.  In the meantime, we will happily get some extra steps in to help fulfill those New Year resolutions to get more in shape!

Check out the latest drone flyover footage from December to get the ‘before and after’ feel of the Lakes course renovation.  The winter rye overseed project is giving us a beautiful green landscape to inspire more winter golf!

Posted by Back9 Marketing at 11:11 AM No comments:

The Lakes Course is shaping up!

After fitting in overseeding between the record HOT September and early FREEZE in October, mid-October brought a tornadic storm with torrential rains, therefore opening was pushed back as we worked to fill in areas of turf where seed flowed away that night.

This photo depicts areas where seed 'run off' occurred. 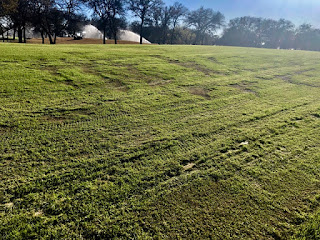 Overseed is really filling in nicely in areas unaffected by the run-off areas.
This is a close up of #1 green on the Lakes course.
Just a bit more growing, rolling and mowing! 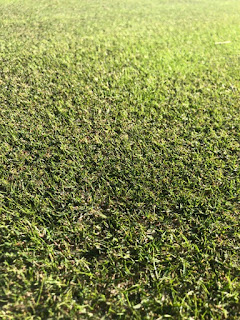 Tee boxes and surrounds are also looking good, for now, the less traffic the better
to further optimize turf conditions and prepare for daily play and Course maintenance. 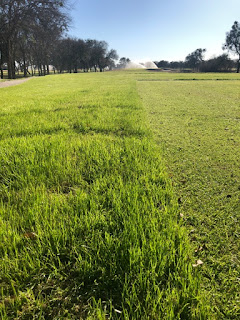 Posted by Back9 Marketing at 8:52 AM No comments:

Fall has arrived and so has our new golf car fleet!

These beauties from Club Car arrived last week and are going to make for a smooth ride. Once we get the technology piece installed they will have the latest GPS, Bluetooth speakers, and geofencing to keep golf cars from driving in restricted areas.  Course conditions will be protected and this means a better experience for all players!

We have a new check-in procedure at the desk to help keep this fleet of golf cars in premium condition for the duration of their 4-year lease.  Come on out and take a test drive!

Lakes Course Update:
The winter rye overseed project was largely a success.  There were a couple seeded areas (mainly hole #16 and #18) affected by the tornadic storms and torrential rain that dumped 3” on the course that night.  Because of that event, it will take more time to fully open.  We continue to monitor growth and are making decisions about opening for some play in a few weeks (Mid December).

The Lakes course will be cart path only during the continued grow-in and we will activate ‘cart path only’ on the new golf cars geofencing feature to ensure the course is healthy and in premium condition for the 2020 season. 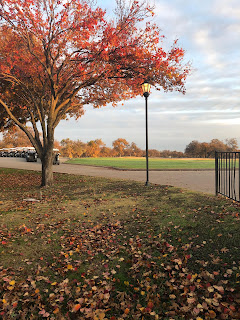 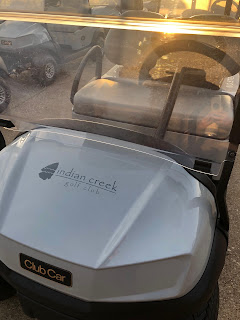 Posted by Back9 Marketing at 8:56 AM No comments:

Temperature for Frost to Form on a Golf Course 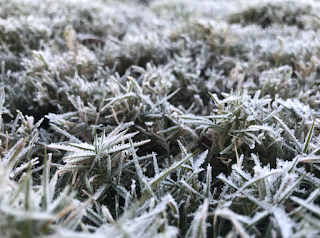 Frost is a form of ice and can only survive at temperatures of 32 degrees Fahrenheit and below. But that doesn’t mean the measured air temperature must be 32 or below for frost to form on a surface. Green grass, for example, absorbs sunlight and heat during the day, then loses heat when the sun goes down, so the grass’s temperature may be lower than the surrounding air temperature. This temperature differential causes moisture to condense on the grass during the night. If the temperature of the grass then falls below freezing, the moisture may crystallize into frost. This can occur even when the nearby air temperature is in the upper 30s, particularly when the air is calm.

When and Where Frost Occurs

Frost may occur overnight, but it often forms at sunrise, before the temperature begins to rise. Frost formation on grass is possible in any location in which the blades’ temperature falls to 32 or below, including warm-weather states such as Florida, California and Arizona. For example, overnight frost may form on an Arizona course on days when the high temperature reaches 70.

Frost itself doesn’t damage grass in the way that it may damage other growing things, such as citrus fruit. However, golfers walking on frosty turf may harm the grass quite badly. Because the grass on putting greens is cut so low, around 1/8 inch, it is particularly vulnerable to damage when it’s covered by frost. When a golfer walks on frost-covered grass it is more likely than normal to break and suffer ruptured cell walls.

The damage caused by walking on frost-covered grass may take two to three
days to appear. By that time the damaged blades may turn purple or black,
eventually fading to a very light brown. If the plant’s growing point is
undamaged, however, the grass should regenerate. If the growing point is
damaged, the plant may die. Additionally, weaker grass, even if it doesn’t die,
may be more susceptible to disease and weed formation.
Posted by Back9 Marketing at 6:23 AM No comments:

We can only hope the weather starts to cooperate with golfers here in Texas…it’s been a rough couple seasons between excessive rain and this September’s mini drought plus record-setting heat!

The Lakes renovation project has been affected by the wet, then dry, hot weather rollercoaster. After 60+ lost workdays the sprigging effort was pushed back to mid August, six weeks behind schedule. When the final sprigs went down conditions were less than ideal with high soil temps and dry layers of clay. Despite these challenges the majority of fairways are growing in nicely as are greens and tee complexes. The final step now is overseeding (winter ryegrass) all fairways on the Lakes course to get it playable and ready for golfer traffic (divots, maintenance and other demands on the turf). Overseeding requires proper (not too hot or cold) temps so we will delay until a cooler forecast becomes reality and allows the winter rye to germinate.

We are ready and know you are too, but we continue to be patient and wait for the weather to give us a break. While we are disappointed weather issues have hindered progress, there is much to look forward to and we keep saying it…‘good things come to those who wait’! The new cart paths are beautiful and ride like a dream, this along with level tees, smoothed out fairways and smart architectural details all combine to promise a new and improved experience for our players to enjoy. Stay tuned for reopening updates (fingers crossed for mid-November)…we post the latest on Facebook and via the Indian Creek APP ‘Course News’ section. 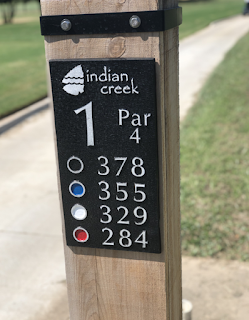 x
Posted by Back9 Marketing at 3:25 PM No comments:

Lakes Course renovation update #5 from Indian Creek GC on Vimeo.
Posted by Back9 Marketing at 7:05 AM No comments: